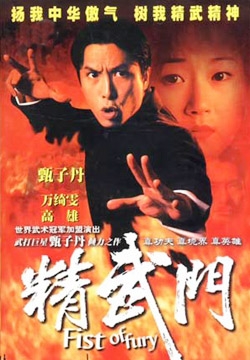 In the early 20th century in China, Chan Zan travels to Shanghai with his younger sister in search of a new life after their home village is destroyed by a group of bandits. He notices that Shanghai is divided into an international settlement under the control of various foreign powers, such as Britain and Japan. Besides, he observes that the martial artists' community in Shanghai is marred with disunity and the various schools are pursuing their individual goals. That reflects the state of China: the Chinese are individualistic and often in internal conflict with their fellow countrymen, instead of uniting to drive out their common enemies (the foreigners) and regain sovereignty of their nation. Fok Yuen-gap, founder of Ching-mou School, is trying hard to persuade and influence the other schools to unite under a common purpose of defending China from foreign intrusion. Chan takes up the job of a rickshaw puller and a coolie to earn a living in Shanghai. Once, he saves the famous singer Yi-kiu from some ruffians and is invited to join the notorious Green Gang through her introduction. Chan proves himself to be the best fighter in the gang and wins the favour of the boss Choi Luk-kan.